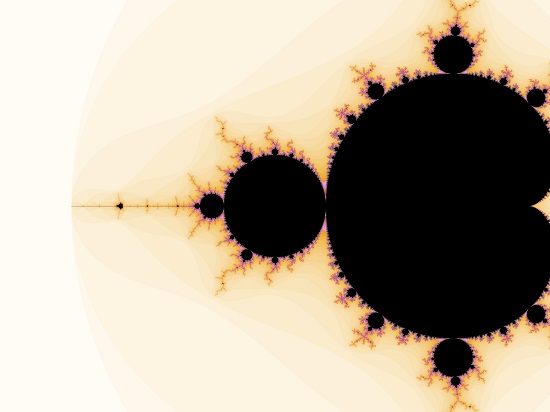 This one is a classic. The Mandelbrot set is a truly complex fractal that was discovered by, surprise surprise, Benoît Mandelbrot. Probably while doodling around, because that’s how a lot of neat stuff is discovered.

What you see in the picture is a visual representation of the complex plane. The point where the two biggest blobs touch, is (0,0), while the line extending on the x axis from that point in both directions are the real numbers.

For each point the following series was iterated and if at any point the value got above 2, it was considered divergent and colored according to how many iterations it took. All black points are, very likely, part of the Mandelbrot set, because they stayed within bounds for many iterations.

The beauty of this fractal is how many shapes and other fractals there are hidden within the border region between parts of Mandelbrot set and the remaining complex plane. Just enter ‘Mandelbrot zoom’ into youtube’s search bar and enjoy.

Correction: The Mandelbrot set is not an actual fractal. It looks like one, but the copies are not identical to the original. This is however a distinction only purposefull for determining certain features of fractals such as the fractal dimension. It should also be pointed out, that the series is assumed to start with the point in question as z(0) and n is an integer greater than zero.